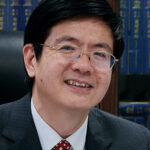 Professor Hong Xiuping 洪修平 received his M.A. degree from the Department of Philosophy of Nanjing University (南京大學) in 1985 and his Ph.D. degree from Fudan University in Shanghai (復旦大學) in 1988. He was senior visiting scholar in the United States (1994–1995), visiting professor at Freiburg University (2000) and in 2004–2005 Fulbright scholar at Harvard University. Hong Xiuping is currently professor at the Department of Philosophy (Religious Studies) at Nanjing University. Moreover, he holds a number of other positions such as Distinguished Professor of the Changjiang 長江 Scholars of the Ministry of Education, member of the Nanjing University Council, director of Nanjing University Library and director of the Institute of Chinese Philosophy and Religious Culture. Hong Xiuping is the author of numerous publications about Chinese philosophy and religious culture, such as 禪宗思想的形成與發展 (Formation and Development of Chan Buddhist Thought, 2011), 中國禪學思想史 (History of Chinese Chan Buddhist Thought, 2007) and 中國佛教文化歷程 (The Course of Chinese Buddhist Culture, 2005).

On April 27th Dr. Hong Xiuping delivered a lecture (in Mandarin) entitled, “從‘心’義種種看南宗禪的特色” [A variety of perspectives on the Southern Chan school’s specificity, departing from the meanings of the character “Mind”].