We are proud to announce the CEIB Lin Li-kouang distinguished lecture for Buddhist Studies.

In January 2017, the CEIB decided to name its annual lecture Series “Lin Li-kouang Distinguished Lecture for Buddhist Studies”, in memory of the Chinese linguist and Buddhologist Lin Li-kouang, a former instructor at Langues’O (1933–1945). The lecture series annually invites an internationally recognized foreign scholar in the field of Buddhist Studies to present his or her work to the French public at the CEIB. 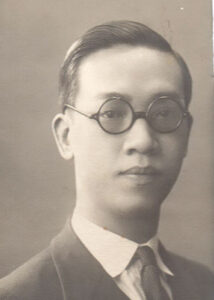 Lin Li-Kouang 林藜光 (1902–1945) was born in 1902 in Xiamen (Amoy), Fujian Province. He graduated in 1926 from the Faculty of Philosophy at Xiamen University and perhaps began his interest in Buddhist Studies at a young age. From 1924 to 1926, he was initiated to Sanskrit by the eminent sinologist and Buddhologist Paul Demiéville (1894–1979) who was in Xiamen at that time. In 1929, he accepted the position as the assistant in the Harvard-Yenching Institute in Peking, at the suggestion of Alexander von Staël-Holstein (1877–1937), an orientalist and a German-Baltic sinologist, with whom he continued his Sanskrit studies and philological researches. At the same time, he started to compile Chinese-Sanskrit Index of Kāśyapaparivarta that comprised more than 10, 000 entries. The index was never published. In 1933, the School of Oriental Languages ​​offered him the position as a Chinese assistant to work alongside Paul Demiéville who was then a professor at the institute. This opportunity allowed him to come to France and study Sanskrit and Pali with the renowned Indologist Sylvain Lévi (1863–1935) at the Collège de France.

When Sylvain Levi was in Nepal in 1922, he had someone copy a voluminous collection of Buddhist stanzas, titled Dharma-samuccaya.

“The copy (…) swarmed with faults almost every line (…). A colophon in the manuscript indicated that the stanzas were taken from Saddharma-smṛty-upasthāna-sutra. Sylvain Levi had recognized that the original Sanskrit version of this great work of the Small Vehicle is lost, but a Tibetan version and two Chinese versions have been preserved; he had not, however, succeeded in finding the stanzas from Dharma-samuccaya. The compiler of the Dharma-samuccaya, an obscure monk named Avalokitasiṃha, had the crazy idea of ​​grouping the stanzas of the Saddharma-smṛty-upasthāna-sutra (…) in his own way, and he had upset so well the order according to which the stanzas appeared in the original sutra (…) that Sylvain Levi himself could no longer locate them in their Tibetan or Chinese versions.” (Demiéville, 1949, Introduction Saddharma-smṛty-upasthāna-sūtration to the Aide-Memoire of the True Law of Lin Li-Kouang)

Collating such a manuscript was an enormous task, and one of the most tedious. Sylvain Levi, already too old to undertake this project, entrusted it to Lin Li-kouang. Following the death of his teacher in 1935, Lin Li-Kouang started to copy the Tibetan translation of the sutra at the National Library of Paris before he applied the same process to the versions of the same text that appeared in the “Collection of Buddhist Scriptures in Chinese”. Both translations would then be compared with the Sanskrit manuscript. By dint of patience and obstinacy, he succeeded in identifying Sanskrit stanzas in the Chinese versions one after another until he was able to correct the Sanskrit text of Dharma-samuccaya.

After he completed the task, he immediately started to draft Introduction to the Compendium of the Law. The draft was originally conceived as a study on the evolution of the Dharma-samuccaya in the context of the history and the languages ​​of Buddhism, but due to the numerous implications of the topic, it eventually turned into a complete study of Saddharma-smṛty-upasthāna-sutra. As the text kept expanding, it constituted an enormous sum of researches that studies Therevada Buddhism at a certain point in time during its historical evolution. Under the heading The Aide-Memoire of the True Law, this introductory text consists of five chapters and three hundred and fifty pages. The workload was so prodigious that it required of Lin Li-kouang ten years of his life, including six difficult years during the Second World War. He was incredibly diligent. He devoted his entire daytime to teaching Chinese lessons while carried on his research in the evening, often late into the night.

The suffering of the war years, the overwork and his anguish towards the sad fate of his distant county and his relatives, took a toll on his health. On April 29, 1945, at dawn, Lin Li-kouang died silently and in absolute solitude at the sanatorium of St-Hilaire-du-Touvet (Isère) at the age of 43. The following year, his remains were transferred to the Père-Lachaise Cemetery where he is now resting for eternity. 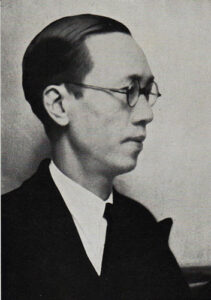 After his death, it was in France that his works were revised and published. Paul Demiéville, André Bareau (1921–1993), professor at EPHE and Jan Willem de Jong (1921–2000), professor at the National University of Australia in Canberra, revised the appendices. The Library of America and the East published all his works in four volumes, in 1946, 1949, 1969 and 1973 respectively.

It is through these monumental works that Lin Li-kouang has contributed to Buddhist Studies in France. Seventy-two years after the death of this Buddhologist who came to France from a faraway land, we have the honor of associating our annual lecture series with his name. Indeed, his career and his work bear witness to the long tradition of collaborations between the three co-founders of CEIB (Inalco, EPHE and Collège de France), as well as between European and Asian researchers. Most importantly, they perfectly illustrate the deep interests that academics hold for Buddhist Studies, driven by the mission of respecting, translating and reconstructing the plurality of civilizations.

For more information on Lin Li-kouang’s life and research, see the Chinese Studies Supplement (2015, vol.34, no. 1).