Project title: “Research on cultural exchanges between China and Japan from the perspective of Japanese monk going to the Song Dynasty for consultation about Tenda’s thoughts——Taking the answer of Siming Zhili as an example.” 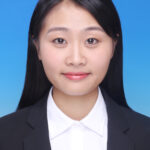 Zhu Qianqian (China University of Political Science and Law) is a hard-working student, specializing in Chinese Philosophy. She gradually became interested in Buddhism. She would later present a professional paper on the topic of Tiantai school. The Development, Role and Status of Buddhism in Chinese Philosophy is a central research topic. According to her academic training and accumulation, she aims to complete this research project and present valuable academic views on a comparative study on the relationships between Buddhism and East Asian Religion in China and Japan.

Zhu Qianqian is kind and humble to others and has good interpersonal and communication skills. She is enthusiastic and interested in communications between different cultures. Her cultural adaptation is very good.