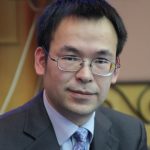 Professor XUAN Fang 宣方 is a research fellow of the Institute for Advanced Studies in Religion, Renmin University of China, as well as the executive member of Journal of Religion. His main academic interests focuse on Chinese Buddhist meditative tradition and Modern Chinese Buddhism, particularly Humanistic Buddhism (renjian fojiao), in which fields he published a book and more than 40 articles including. Furthermore, he is also guest professor of many Buddhist academic institutes such as the Institute of Chinese Buddhist Culture, Institute of Peking Buddhist Culture, Peking University, Chinese University of Hong Kong, Xiamen University, and Yunnan University. Xuan Fang will give lectures, seminars and workshops on a variety of topics and at various levels during his stay at Ghent University (January 6–March 3, 2020). He will also closely cooperate in the framework of the current research projects.

Professor Xuan gave the following lecture: “From Tranquility (ji 寂) to Illumination (zhao 照): The Jizhao Temple in the Context of Social Changes in Dali Prefecture” (由寂而照：社會變遷中的寂照庵) on February 26, 2020.

The lecture focuses on an unknown Buddhist nunnery suddenly going viral, through which Dr. Xuan tries to draw the outline of the revival process of Buddhist nunneries in Post-Mao China. This lecture fits within the framework of the Buddhist Studies Lecture Series 2019–2020.