“Through Altruism to Ultimate Enlightenment” Lecture by Dr. Rey Sheng Her, Director of Tzu Chi Foundation and Visiting Scholar at Columbia University

On November 7, 2019, Dr. Rey-Sheng Her gave a lecture at UBC titled, “Through Altruism to Enlightenment.” Dr. Her is currently a visiting scholar at Columbia University and adjunct Associate Professor at National Chengchi University. He has served as the Spokesman and Director of Humanity Development at Tzu Chi Compassion Relief Foundation since 2002, and was a visiting scholar at University of Oxford, University of Cambridge and Columbia University between 2018 to 2019. As well as being an accomplished scholar, Dr. Her was also a senior news anchor and television program producer. He produced the documentary, “The Great Love as a Running Water: Testimony to the Development of Bone Marrow Transplantation”, which won as the best documentary in the regions of Asia and Africa bestowed by the 32nd International Emmy Award. Dr. Her’s recent research is centered on the philosophy of altruism and its application to organizational governance and economic life. The lecture he gave at UBC was specifically focused on the Tzu Chi Compassion Relief Foundation and the rise of Humanistic Buddhism. 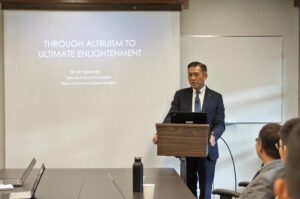 Humanistic Buddhism prioritizes social transformation and altruistic devotion as important parts of the Buddhist path. Through altruistic devotion, one can purify their spirits, therefore resulting in ultimate enlightenment. These practices are embodied in the Tzu Chi Compassion Relief Foundation, which places emphasis on the action of Buddhism. This organization was founded by Dharma Master Cheng Yen in 1966 and has four missions: charity, medicine, education, and culture. The aim of these missions is to purify the human mind, harmonize society, and free the world from disasters and suffering.

The spiritual center of Tzu Chi Foundation is the Jin Shi Abode, which can be found on the east coast of Taiwan in Hualian. When the abode was established, the east coast of Taiwan was undeveloped and impoverished. The Master and her monastic disciples were completely self-sufficient, sewing baby shoes and doing various handy jobs to support themselves. This self-support principle allows them to guarantee that all donations can go to the needy, which builds integrity and trust.

The core values of the Tzu Chi Foundation are selfless giving and giving with gratitude. They recognize how fortune they are to be in a position to help and give to others, and channel this gratitude when they are doing charity work. All of Master Cheng Yen’s disciples are committed to providing aid to those in disadvantaged areas and they often go abroad to help communities around the world. Dr. Rey-Sheng Her gave an overview of the charity work that Tzu Chi Foundation has been doing abroad, such as natural disaster relief after 2005 Hurricane Katrina in the United States, the 2011 311 (March 11th) tsunami in Japan, the 2015 earthquake in Nepal, the 2003 earthquake in Iran, the 2009 Typhoon Morakot in Taiwan, and so many others. Tzu Chi not only provides medical assistance, but also rebuilds homes and churches, or puts in new systems to give clean water to communities. With over 12 million members and 2 million volunteers worldwide, Tzu Chi volunteers are currently active in 58 countries/regions and have helped people in over 100 countries. However, it is notable that the work they do is not solely through volunteer involvement. They also employ local people to work towards rebuilding their own communities and create strong relationships with the leaders in these regions. 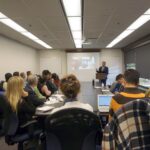 The work of Tzu Chi volunteers is greatly respected everywhere they go, by both Buddhists and those of other religious organizations. Ms. Gladys Ngema, the first South African Tzu Chi Commissioner, who was once a recipient of Tzu Chi assistance, is now a devoted volunteer with the organization. Even though Ms. Ngema is Christian rather than Buddhist, she said, “When I was at the bottom, it was Tzu Chi who saved me. Cheng Yen has sent us these messengers. We are doing God’s work.” She believes that the work of the Tzu Chi Foundation is bringing her even closer to God. In Iran, the Elder Habib even hung up a photo of Dharma Master Cheng Yen in every classroom and said that Cheng Yen’s great love is like sunshine enlightening everyone in the world. This epitomizes the cross-cultural and cross-religious work that Tzu Chi Foundation has been able to achieve.

After introducing the Tzu Chi Foundation, Dr. Rey-Sheng Her went on to discuss how a foundation like this presents a sort of Buddhist Renaissance in the modern age. The altruistic goal of Tzu Chi is to purify their spirits through helping others, because “through social fulfillment, one can reach self-actualization.” Tzu Chi is working to transform its recipients into becoming givers themselves and to spread the Dharma through emphasis on material assistance.

The distinct Taiwanese cultural environment that the Tzu Chi Foundation is situated in has surely made an impact on these initiatives and development of the Dharma. Taiwanese culture is a combination of Confucianism and Buddhism, as well as being impacted by Western colonization and the modernity of Chinese cultures. As Dr. Her pointed out, Master Cheng Yen “with her extraordinary wisdom and personality, has applied and integrated the collective cultures and led them to flourish.”

The influence of Chinese Buddhism in the early 19th century greatly influenced the establishment of Tzu Chi, and in particular, the legacies of Dharma Masters Taixu and Yinshun. Taixu believed Buddhism is about wisdom and wellbeing in life, not just about dying in peace. He claimed that temples should devote themselves to charity, education and culture, and advocated for enlightening the self and then bringing benefit to others. As Dr. Her explained, Taixu’s influence was the idea that Buddhism is ultimately about living, not about dying. On the other hand, Yinshun promoted the bodhisattva ideal of benefitting others in order to benefit the self, because great wisdom and emptiness are built from great compassion.

Volunteers with Tzu Chi are able to experience the Dharma by observing impermanence while also relieving the suffering of others. The core idea of Master Cheng Yen was to save others before saving yourself. Because bodhisattvas vow not to attain Buddhahood until all sentient beings have been enlightened, it is only through the practice of constant giving that a bodhisattva can attain the “absolutely pure Dharma Kaya.” Master Cheng Yen explicated this with a metaphor: “It is like a lotus blossoms from the murk, which is the nutrient of the lotus.” Likewise, “the contaminations of the sentient will be the fertilizer to the practice of the bodhisattvas.”

Based on the beliefs of Master Cheng Yen, the concept of selfless giving became key to Buddhist practice because acting selflessly is an indication of emptiness and giving corresponds to the idea of interdependent arising. The dedication to helping people allows Tzu Chi members to eliminate their own desires and take all sentient beings as their teachers. This in turn manifests the Three Wheels of Essential Emptiness, which is no giver, no receiver, and even no giving. We are all bringing benefit to one another, either by being the giver or the receiver, and therefore accumulating the awareness of emptiness and impermanence.

Master Cheng Yen established the Jing Si Dharma Lineage, which focuses on “the cultivation of calm contemplation and elimination of desires through diligent dedication to the people.” Dr. Her expanded on these principles saying, “By doing so, one can comprehend the equality of all sentient beings and the connection of all things, and thereby attain Buddha-nature and the wisdom to understand the unity of all the Dharma.” Since the Dharma exists within all sentient beings, releasing the self and “looking closely at the heart of others” in a mindful manner “can be conducive to spiritual awakening.” Therefore, we should take all sentient beings as our teachers, listening to volunteers and those they are helping and being grateful for the opportunity to be able to provide relief.

Dharma Master Cheng Yen takes the Threefold Lotus Sutra as the core teaching for her lineage. Cognitive development begins with the Four Immeasurable of Mind: mercy, compassion, bliss and giving. Next, she emphasizes the Eight Correct Paths of the original Āgamas ideas, the practice of virtues and cultivation of self. Then, following the example of Ksitigarbha Bodhisattva, one is to walk the Bodhisattva Path indicated in the Lotus Sutra, vowing to relieve the suffering of others before achieving enlightenment for oneself. Finally, one is to attain enlightenment through the insight of impermanence, joyfulness, wisdom, and purity of nirvana.

The Tzu Chi Dharma Path of Buddhism takes the Sutra of Infinite Meanings and the Medicine Buddha Sutra as their foundational texts. The Sutra of Infinite Meanings discusses the “empty inner nature” and “benevolence for all beings,” which is the main basis for this school. On the other hand, the Medicine Buddha Sutra presents an “optimal pure land” that the Tzu Chi school of Buddhism strives to create in the world through physical health, material abundance, and spiritual enlightenment.

Dr. Her concluded his lecture on the Tzu Chi school of Buddhism and the rise of altruistic action in modern Buddhism by explaining when all thoughts are focused on others, this is no thought. This action-focused development in Buddhism allows practitioners to release their ego and concept of self by concentrating on others and embodying the bodhisattva ideal in our lives. Therefore, humanistic Buddhism teaches practitioners to go “through altruism to ultimate enlightenment.” 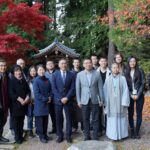 Video of Dr. Her’s lecture can be viewed at FROGBEAR’s Youtube channel: https://youtu.be/Y1L3sbqrEUw.