Guest Lecture: Infinite Interfusion: The Visible and the Invisible in Liao Pagodas

Abstract:
The shamanistic Khitan people were exposed to Buddhism −the Indian religion that reached these nomads mediated by the Han Chinese sedentary culture—when they suddenly rose to power and founded the Liao Empire (907–1125). By exploring the pagodas from the Liao Empire, this lecture discusses how the synthesis of these different cultural traditions gave birth to innovative architectural practices, configurations that imagined Buddhist cosmology and the Buddha body through the interplay of the visible and the invisible. Although this unprecedentedly complex Buddhist cosmology was developed in China during the Tang dynasty (618–907), it was the Liao who achieved its most cogent embodiment in architectural form. These Liao pagodas operated according to a dialogic relationship between the visible and the invisible, since the ultimate “Buddha body/cosmos” was invisible and its essence was emptiness (śunyatā), the fundamental Buddhist teaching. At the same time, these cosmological pagodas were the loci where Buddhist doctrine intermingled with rituals activating a potent mandala and incantation. The Shamanistic tradition in which stars played an important role, as well as Chinese beliefs that heaven served as a canvas that could exhibit ominous and numinous signs for the ruler, facilitated a transformation of the pagoda into a microcosm where spiritual aspirations intersected with the worldly desire of Liao imperial patrons. 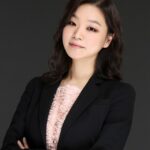 Youn-mi Kim is a specialist in Chinese Buddhist art, but her broader interest in the cross-cultural relationships between art and ritual extends to Korean and Japanese materials as well. Before joining the faculty at Ewha Womans University in 2017, Kim was an Assistant Professor in the Department of the History of Art at Yale University from 2012 to 2016. Kim worked as an Assistant Professor in Asian art history at The Ohio State University (2011–2012) and a postdoctoral associate at the Council on East Asian Studies at Yale University (2010–2011). She is particularly interested in symbolic rituals, in which an architectural space serves as a material agent; the interplay between visibility and invisibility in Buddhist art; and the sacred spaces and religious macrocosms created by religious architecture for imaginary pilgrimages. She is the editor of New Perspectives on Early Korean Art: From Silla to Koryŏ (Cambridge, MA: Korea Institute, Harvard University, 2013). Her article, “The Secret Link: Tracing Liao in Japanese Shingon Ritual,” appeared in the Journal of Song-Yuan Studies 43 (2013 [published in 2015]).  Based on archaeological data from a medieval Chinese pagoda and medieval ritual manuals, she is currently completing two book manuscripts.