Abstract:
This talk focuses on the historical transformation of Mt. Jiuhua from a local mountain to a national pilgrimage destination and the ways in which Mt. Jiuhua became the divine abode of Dizang Bodhisattva (Skt. Kṣitigarbha), a savior of the underworld beings in Chinese Buddhism, in the late imperial period (14th–20th centuries). This study explains the making of the sacred mountain by analyzing four salient features of local Jiuhua Buddhism. First, it deals with the cult of mummified bodies by looking into local mortuary practices. Jiuhua Buddhists, choosing not to follow the monastic rules concerning cremation, opted to create a successful tradition of mummy-making for the deceased Buddhists. The continuing emergence of new mummies shaped the perceived sacred atmosphere of Mt. Jiuhua. Second, by analyzing relevant precious scrolls (baojuan), it reveals how vernacular literature functioned as a medium for the localization of Dizang. The performance based on such literature that was carried out at Buddhist events was the key to the further dissemination of the image of Mt. Jiuhua as a sacred mountain. Third, it explores the devotional practices of the eminent Buddhist master Ouyi Zhixu (1599–1655) on Mt. Jiuhua during his sojourn, and how the highly charged religious atmosphere of Mt. Jiuhua facilitates Zhixu’s devotion to Dizang. Fourth, it argues that the sacredness of the mountain was constructed and negotiated through pilgrimage practices, evidenced by many material objects used in pilgrimage. In summary, in explicating the uniqueness of Jiuhua Buddhism, this study adopts an interdisciplinary approach that bridges religion and geography and contributes to the study of sacred space in Chinese religion. By challenging the artificial dichotomy between “institutional” and “popular” religion and using understudied local materials, this study provides a different evaluation of the vitality of Ming-Qing Buddhism by focusing on religious practices. 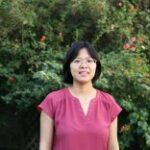 Nan Ouyang earned her Ph.D. degree in East Asian Studies from the University of Arizona in 2019 with her dissertation on the history of Mount Jiuhua as the divine seat of Dizang Bodhisattva in late imperial China. Her research interests include Ming-Qing Buddhism, modern Chinese religions, sacred space, pilgrimage studies, among others. She has published several papers on the Journal of Chinese Religions and Journal of Chinese Buddhist Studies.