Abstract:
In the grand narratives of the transmission of Buddhism to China, only beginning in the early fifth century did Indian Buddhist literature come to be translated into Chinese in a manner both accurate and comprehensible. Though “accurate” is arguably a normative assessment that we might question, there can be no doubt that many pre-fifth-century Chinese translations of Indian Buddhist texts are very difficult to understand and that later Chinese Buddhists on the whole rarely read, studied, or commented on them. As scholars have in recent years analyzed in more detail the texts attributed to key early translators such as Dharmarakṣa 竺法護, Zhi Qian 支謙, and An Shigao 安世高, we have learned much more about the how these early translations worked. Yet while it is now often possible for us, armed with our knowledge of parallel Indic texts, to see how these early translations were intended to work, it is much harder to know how or whether Chinese readers would have made sense of them. In this paper, I will examine whether early Chinese Buddhists were able to understand their scriptures by looking at the very few cases where we have access to (1) a difficult-understand early Chinese translation, (2) a parallel Indic text that allows us to be nearly certain how the translation was intended to work, and (3) an early Chinese commentary that allows us to see how the passages were understood. Such commentaries once existed for a fair number of pre-Kumārajīva Chinese Buddhist scriptures, though only a few survive within the Chinese Buddhist canon. In recent years, a number of new (albeit fragmentary) commentaries to pre-fifth-century translations have come to light from the Dunhuang and Turfan manuscripts. Drawing from these examples, in this talk I will discuss some cases where early Chinese commentaries evidently preserved accurate knowledge of the original Indian texts that had not been included in the translations proper or which had in the translations been rendered in an impossible to understand form. Here, in short, we have evidence for a living interpretive community, presumably one originating in the original translation event itself, that at least sometimes provided a scaffolding that would have made even impossible-to-understand Chinese translations comprehensible. 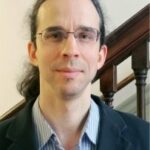 Eric Greene is Assistant Professor of Religious Studies. He received his B.A. in Mathematics from Berkeley in 1998, followed by his M.A. (Asian Studies) and Ph.D. (Buddhist Studies) in 2012. He specializes in the history of medieval Chinese Buddhism, particularly the emergence of Chinese forms of Buddhism from the interaction between Indian Buddhism and indigenous Chinese culture. Much of his recent research has focused on Buddhist meditation practices, including the history of the transmission on Indian meditation practices to China, the development of distinctly Chinese forms of Buddhist meditation, and Buddhist rituals of confession and atonement. He is currently writing a book on the uses of meditative visionary experience as evidence of sanctity within early Chinese Buddhism. In addition to these topics, he has published articles on the early history of Chan (Zen) Buddhism, Buddhist paintings from the Silk Roads, and the influence of modern psychological terminology on the Western interpretation of Buddhism. He is also presently working on a new project concerning the practice of translation – from Indian languages to Chinese – in early Chinese Buddhism. He teaches undergraduate classes on Buddhism in East Asia, Zen Buddhism, ritual in East Asian Buddhism, and mysticism and meditation in Buddhism and East Asia, and graduate seminars on Chinese Buddhist studies and Chinese Buddhist texts.